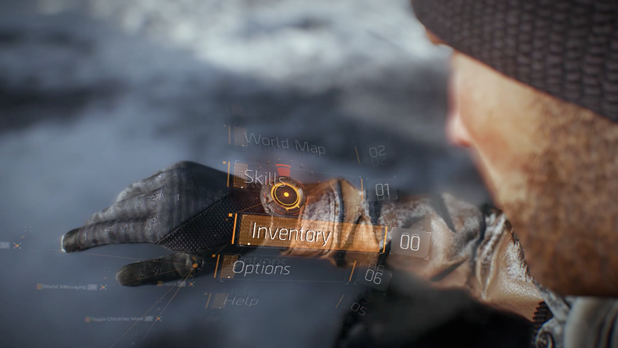 Recently we had a poll in our forum about which game’s UI you would like to see recreated and the upcoming game The Division by Ubisoft was voted number one. In this tutorial we’ll show you how you can create 3D hologram menu similar to the watch in The Division.

On the picture below you can see the finished menu. In part 1 of the tutorial we’ll have a look at the setup of the level in UE4 and we’ll create the needed 3D objects in 3ds Max. In part 2 we’ll create the HTML UI itself using Adobe Edge and the Coherent Labs animation framework.

1. The “anatomy” of the project

We’ll use Autodesk’s 3ds Max to model the needed 3D shapes but actually the models are quite simple so if you don’t have 3ds Max you can use free alternatives like Blender.

First, we’ll create the gengon that will be used for the menu. To do this we’ll use the gengon tool (located under create/geometry/extended primitives) and it’s properties we’ll setup the size and number of sides.

Then we’ll create the square mesh using the plane tool (located under create/geometry/standard primitives) and set the length and width to the same value.

Then we’ll create the mesh for the watch. We’ll skip the details about it’s modelling as this is out of scope for this tutorial but you can download it from here along with the other meshes.

Once the meshes are ready we’ll just export them as FBX files using the file/export menu.

For this tutorial we’ll use Unreal engine 4 however, using roughly the same steps you can achieve this functionality in other engines such as Unity 3D.

We’ll use the Coherent Labs FPS sample game as a base for our Unreal project. First, we’ll remove all the objects but the floor as we don’t really need them.

Then we’ll import the FBX files for the meshes by dragging them to the Content browser window.

3.3 Create the material and add the Coherent UI component

The next step is to create the material and add the Coherent UI component to the meshes of the gengon and the square.

3.4 Add the blueprints and the watch to the level map

Now that we have the blueprints ready we drag and drop them from the content browser to the level map along with the watch mesh.

Then using the move and scale tools of the UE4 editor we’ll position the meshes and we have our level setup!

Stay tuned for part 2 of the tutorial where we’ll create the HTML UI itself using Adobe Edge and the Coherent Labs animation framework.