Far Cry 3, the long waited role-playing shooter game, has just been released in the US for consoles and PC. Critics describe it as “something like Skyrim but with guns” and many say that this is the best game UbiSoft has released since Assassin’s Creed: Brotherhood.

We don’t know if this is true yet, however when there is so much buzz around an AAA title the team of Coherent Labs is always curious to find out more about it. Since we believed that many of you will be interested to learn more as well we decided to share with you some screenshots of Far Cry 3 introducing you to the game’s UI and gameplay.

As you can see on the picture there are different kind of troops in Far Cry 3: skulls are the normal guys, the shields are the heavies, and be careful from the lightning guys – they are fast, suicidal and probably the most dangerous NPCs. There are also 2 types of animals – herbivores and predators. With so many enemies the good news is that you are able to see people through the walls which allows you to prepare a stealth attack instead of getting killed in the melee. You’re also able to spot others on your mini map. 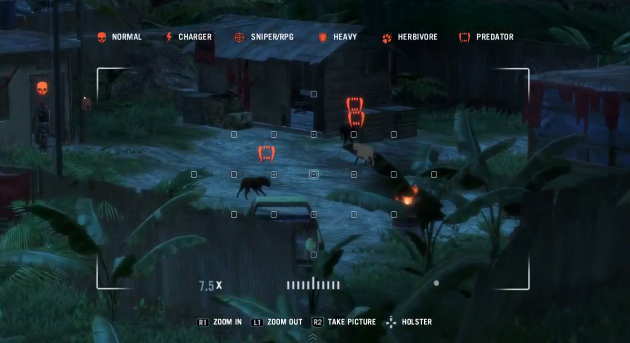 This beautiful HUD represents the camera that you use to zoom in and get a closer look before you decide to explore certain location. It has a nice legend explaining about the types of NPCs you might see and it also allows you to take pictures which you’re able to review later in your gallery.

This is how the map looks like in Far Cry 3. The red bits represent the enemy controlled territory which you need to conquer. You are allowed to fast travel to your camps marked on the map and, last but not least, you can see different kind of animal territories – bears, deer, pigs, etc.The map also displays cursor’s coordinates and has a legend explaining the meaning of each icon.

This is one of the RPG elements in the game allowing you to take quests for which you get small rewards and xp. The fun part is that you’re supposed to kill the target with a specific weapon in order for the mission to be successful.

In the game inventory you are allowed to carry and use different kind of potions which you prepare by yourself using ingredients that you find on the island. This is why the player in Far Cry 3 needs to pay close attention to the wildlife or he’s going to have a tough in the game.

There is the place in every camp where you are allowed to buy weapons and ammo, to customize them by changing their skin or to improve their performance. 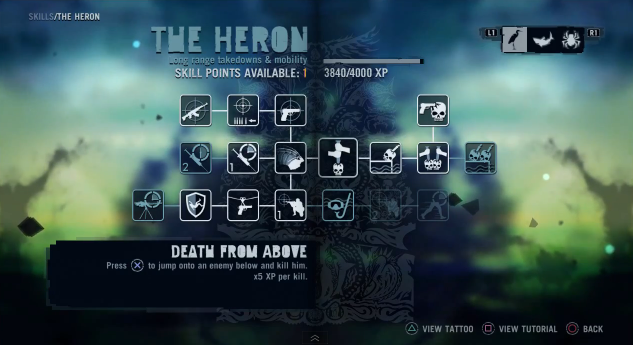 You are also allowed to learn lots of skills in Far Cry 3, mainly divided in 3 category: 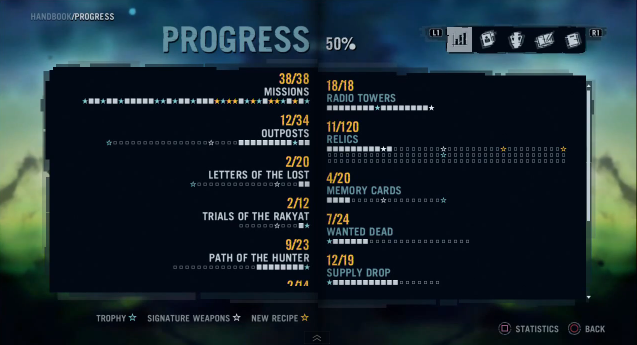 This is how the Handbook looks like. Here you can check out your progress of the game: number of missions, quests, skills learned and more useful things.

If these screenshots are not enough for you to get a feeling about the game’s UI and gameplay, you might want to check out this video review of Far Cry 3 done by the Official Playstation magazine.

Far Cry 3 is one of these games that impresses with great UI and gameplay. You will be surprised how big is the world in the game and that it has a life of its own with NPCs attacking each other on island regardless of your presence.