Hi there, I am Stan and today I will show you how to use the Localization feature of Unreal Engine 4 with the Coherent UI. Usually there are many hassles when it comes to localizing a game, but when using UE4 this is not the case. Epic has done a great job with their new Localization System, which was scrapped and rewritten during the UE3->UE4 transition. It is still in development, but I can see the effort that was put into designing the system.

The localization workflow will be as follows:

To demonstrate how the localization system works, I will use a very simple sample – the Menu_Map that ships with the Coherent UI installer for UE4. It is a simple level that shows a menu with 3 buttons, which we would like be translated.

Step 1 – Declaring strings that will be translated.

In this step I will tag the buttons that will have their text translated in the HTML and declare that I want translation for a text entry.

The Menu map loads the coui://UIResources/Menu/menu.html page, which will be our starting point.
In the page you can find some css includes, javascript includes and most importantly – the 3 menu buttons. In the button tag of the start button I will add a property called data-l10n and set its key to StartButton. E.g.

The name of the “data-l10n” tag can be anything you would like, as long as it starts with “data-“.

Now we have to declare that we want a translation for the “StartButton” key. In the menu.html file I will add a comment containing the following declaration:

It shouldn’t matter where in the HTML page the comment is, in my case I placed it right after the Doctype HTML declaration. Now, what is this C++ like declaration and why we need it?
NSLOCTEXT is a C++ macro that declares a new localization text. It takes 3 parameters:

The UE4 localization system works with three types of files:

Now, back to the practical part. The generation of the manifest, archive and locres files happens with the help of a Unreal Engine commandlet called GatherText. Commandlets are mini-programs with a specific purpose. In this case the commandlet reads a configuration file and executes the steps defined in it. The commandlet is called with:

or in my case:

Note: The -log > localization.log bit is optional and is used to generate a localization.log file. The log will be created in your current working directory and will contain the output log of the GatherText commandlet. If something goes wrong, you can check in the log what and where.

The configuration LocSettings.ini file contains a list of settings and series of steps that will be executed by the GatherText commandlet. The config that I have used is the following:

Most of the options in the configuration file are self-explanatory, but there are some things which I would like to point out:

Step 3 – Enter the translation strings for texts that you want to translate.

After you have run the commandlet, in

you should have the following folder structure:

Now we would like to translate the key for StartButton (from section 1) in Spanish. In order to do so, navigate to the YourGame/Content/Localization/Game/es and open the LocalizedText.archive. In the “Translation” field you should enter the translation of Start Button in Spanish (I will trust google translate this time).

After we have filled the empty translation fields, we have to run the same commandlet again:

Once the translation strings are filled, re-running the commandlet will not erase the existing translation entries and will re-generate the binary .locres file. If you are not sure if the Spanish translation made it to the .locres file, you can open the YourGame/Content/Localization/Game/es/LocalizedText.locres file with hex editor and inspect its contents.

After we have generated the locres files with the localized tests it is time to head to the UI again and bind it to the game.

In the Menu.html page we have to ask the UE4 engine about the localization of the buttons tagged with “data-l10n” attribute. To do that, I have written a small script and put it right before the end of the HTML body:

The script does a few things:

Note: Initially, the buttons are marked as hidden and when the SetLocalization event is received they are shown. This is done to prevent any text “flickering” that might occur, although my tests did not result in such.

There are four things to do in order to make the localization work:

Now when you run the game, the menu buttons should be in Spanish. 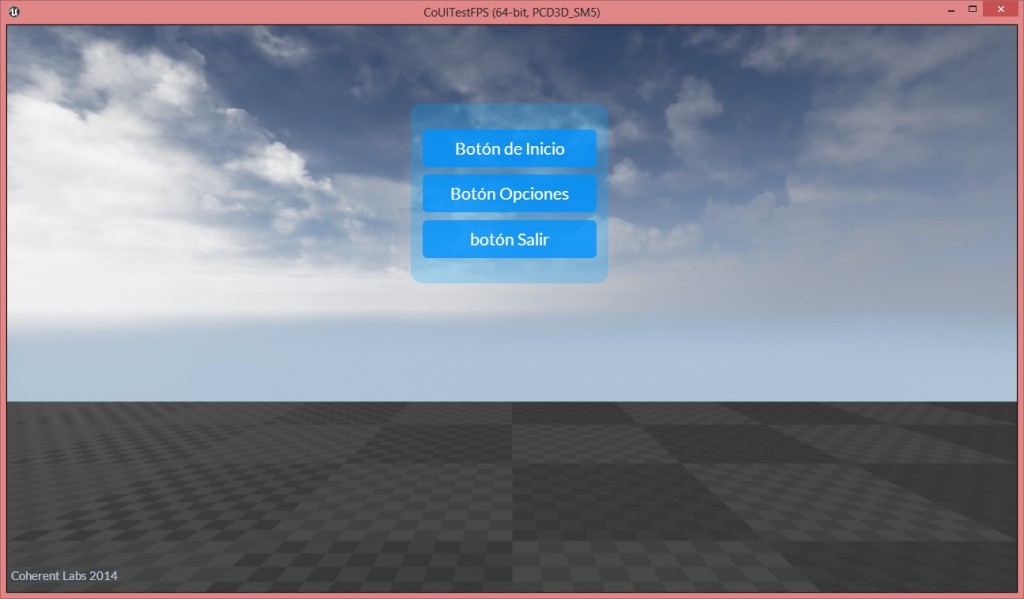 This is everything you need in order to use the localization system of Unreal Engine. It came up quite lengthy, but I wanted to compile everything in one place, as it took me some time get the pieces of information available on the topic together.