We’ve just released the latest version of the Coherent Editor – 1.3 and it’s packed with many new features and improvements. We decided to write this post to tell you a bit more about some of the most interesting of them – the visual timeline, the widget system and the new asset import option from Adobe Photoshop. 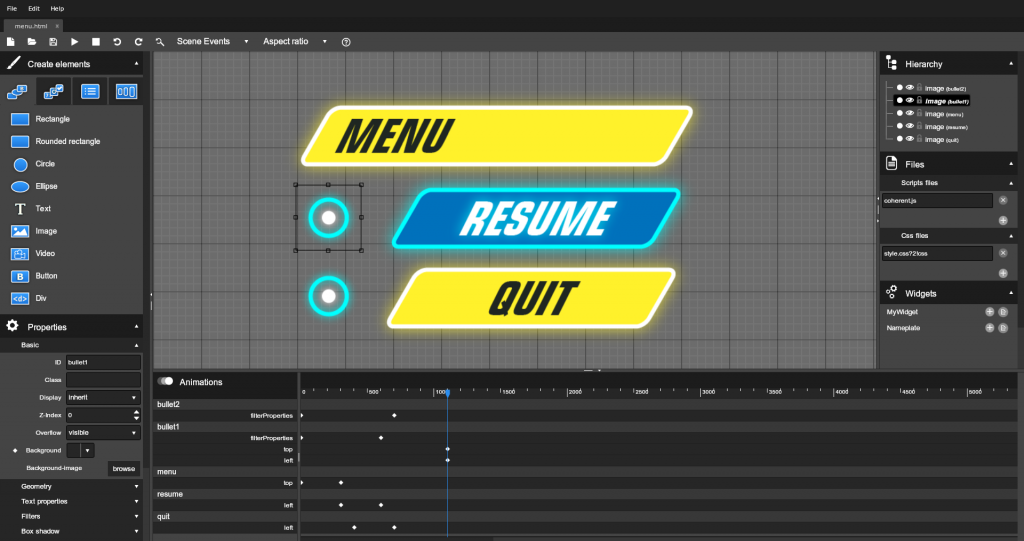 Needless to say animations are essential for any game UI. With the new visual timeline introduced in Coherent Editor 1.3 they can be created and edited faster and easier than ever before. Using the intuitive visual interface you can quickly add amazing animations to your UI without any scripting or external CSS files. Furthermore the animations are based on CSS which have superior performance compared to JavaScript.

The created animations are standard CSS so you can preview them in Coherent Editor, live in the actual game or even in your own browser. If your are using Chrome you can actually preview the sample HTML page below which was made with the Coherent Editor.

A detailed guide for the visual timeline is available in the online Docs.

Another really useful feature of the Coherent Editor that is new in 1.3 is the new widget system. It provides an easy way to group individual UI elements into reusable prefabs. Using widgets has two main benefits:

More information about the widget system is available in the online Docs.

Individual standard images can be added by creating new image element from the Create panel. Apart from this option the Coherent Editor has also an unique feature that allow you to import assets from Adobe Photoshop even faster.

To use the method you just need to follow a few basic steps:

Again more detailed guide about this feature can be found in the online Docs.

But this is not all – Coherent Editor 1.3 has new rendering backend (that provides up to 2x faster performance), new image files support, localization options as well as many other improvements.

Go ahead and check the latest features of the Coherent Editor 1.3 either in the online preview demo or in your copy of Coherent GT.