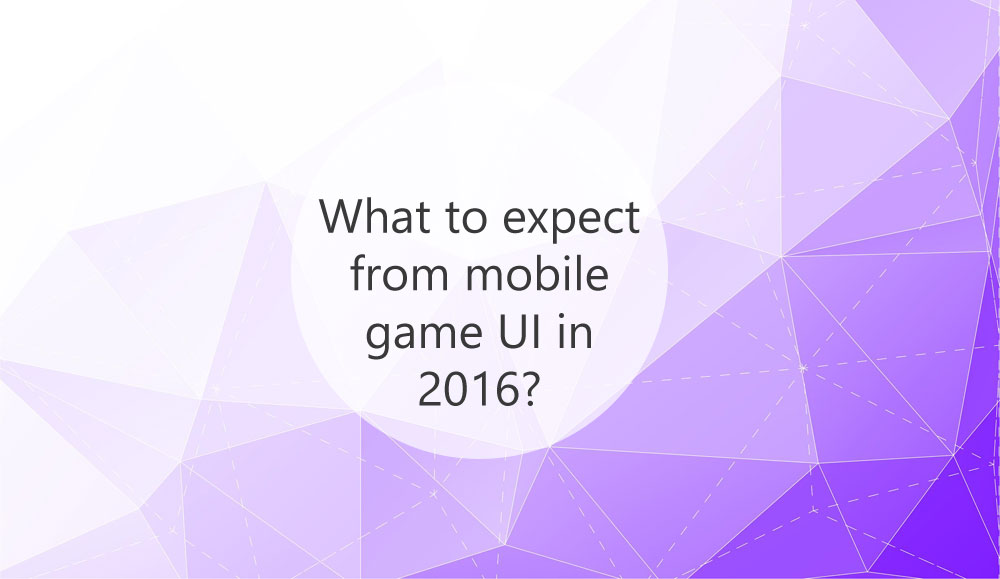 Last year was a great year for the mobile game developers. The industry grew with 23% rate compared to 2014 despite the slowdown in the Western market (~$30 billion generated by mobile games worldwide in 2015, according to Newzoo). The big winners were several leading gaming companies which free-to-play titles dominated the top-grossing charts during the whole year. Very few independent game developers managed to find their place in the charts and to attract the attention of the mobile players. In 2015 leading Western game developers such as SuperCell and Kabam made a great effort to enter and seize the Asian market. Also, noticeable was the effort of hard-core PC game developers such as Batesda to extend their player base through a mobile title. One of the most memorable events, however, was the acquisition of the mobile giant King by Activision.

What should we expect in 2016? Is there going to be a major shift in the mobile gaming market?

In the upcoming year, the market will stay hugely fragmented and dominated by the large mobile game developers and publishers. The competition will be even fiercer and the price for acquiring new players will continue to rise. This will lead to mobile developers bet on fewer but polished games with increased marketing budgets. An expected slowdown in the Asian market will make game developers look at emerging markets such as India. Virtual Reality is meant to be the next big thing in mobile gaming, however, it seems that the trend is a long-term one and it is not likely for VR to overtake the mobile scene in 2016.

How will these trends affect mobile game user interfaces?

Discoverability on the mobile stores will continue to be an issue in 2016. The leading mobile developers will have an advantage by cross-promoting titles within their fan network. The cost per acquisition of new users (CPA) will be more expensive than in 2015. In addition, a large player base may not guarantee high ROI. Mobile developers will focus their efforts on engaging customers for longer time period and more often as well as attracting new players. It will be crucial for the game UI to be very intuitive and user-friendly in order to keep the attention of the paying customers (whales). Designers and developers must make sure that they understand the customer flow and habits in order to engage them in the right way at the right moment. The key word which will lead the talk about mobile game UI design in 2016 will be data-driven UI.

The free-to-play model and microtransactions seem to be working well for mobile games. It will continue to dominate the industry during 2016. Free-to-play however, hides a lot of risks for mobile developers as it requires deep understanding of customer psychology. To provide a great user experience teams should create a complex monetisation system, smart player triggers and provide frequent updates with new, engaging content. The minimalistic UI design with fewer steps will continue to be a main trend of mobile games during this year. Colors will also play an important role in creating user experience and helping players get around more easily without additional explanations. A great example is the inventory screen at Star Wars Commander where the most upgraded items are marked with a green frame and could be easily recognized by the players. Check out an image here.

Localization is a must

The rise of emerging markets such as India and the slowdown of mature markets (Western and Asian market) will push companies towards entering new territories. However, such a move will require serious localization efforts and sometimes even changes to the user flow and to the gameplay. Teams should design the mobile game UI in such a way that elements could be easily tweaked, added or removed to fit the specifics of the local market. Last year at PG Connects Helsinki, Chris Petrovich, (SVP & Head of Corporate Strategy & Development at Kabam) used the term “culturalization” rather than “localization”. Based on Kabam’s experience game developers should adjust all game elements to the local taste in order for a title to be successful on new markets.

In 2016, the leading gaming companies will focus efforts on few, well-polished titles rather than on a large number of games. The high competitiveness in the industry requires companies to provide superior user experience. With the further development of mobile devices there will be a shift in mobile game graphics towards PC-quality. The game user interface will not fall behind. The need to differentiate a title will push UI designers to create more vibrant, interactive UI with complex animations and 3D elements. A great example for such highly-polished user interface is Angry Birds 2’s UI.

Interactive UI with animations however comes with a quite heavy performance burden which should be carefully considered by developers. Smooth user interface is a key factor for a great user experience which means that developers need to keep the gentle balance between performance and design.

At large, in 2016 we expect to see visionary mobile game UIs which will make the gameplay more enjoyable and engaging!

What do you think about the UI trends in the mobile game development? Share your thoughts in the comment section below!