It is done! The biggest update to Coherent GT is at last available and contains all the features you were asking for!

GT 2.0 was in the making for quite some time, but trust us, the wait was well worth it! Originally, we had hoped for an earlier release, however, we had to make sure that the tremendous amount of changes we had to merge did not introduce any issues. Our goal was to ensure that upgrading your existing UI was a walk in the park. At times we were so rigorous about finding and fixing bugs that we squashed a few that had been lurking for several months in GT 1.x without our knowledge.

So, what exactly changed?

As you probably know, Coherent GT is based on WebKit. All 1.x versions were based on a version branched in late 2013. The web world moves fast and being 4 years old meant that we were missing on a bunch of quality of life changes. With the WebKit version, we introduce a massive JS performance improvement, improved workflow, more functionality on the HTML/CSS/JS part of the pipeline, and allow you to iterate even faster.

GT 2.0 is based on Safari Technology Preview 34 (released on the 28th of June). To point out some of the differences, let’s run some tests: 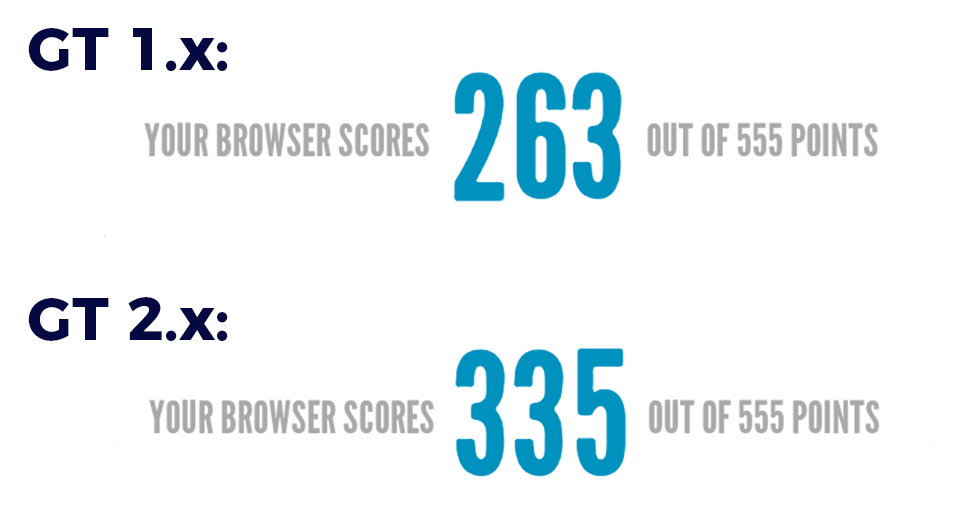 Here is how our ES6 support looks like now: 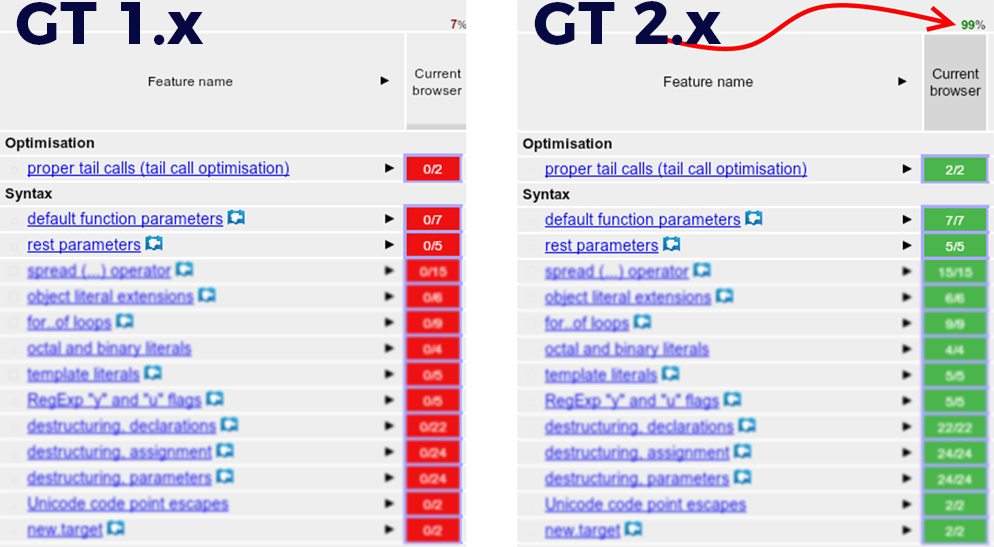 If we had to go into details about all of the changes the upgrade entails, this blog post would be exasperatingly long. That is why our bright front-end team wrote several blog posts covering in detail some of the added features like EcmaScript6 and CSS variables! We suggest you give them a run for their money by checking them out and telling us what you think!

However, as GT 2.0 was long awaited and build with tremendous effort from the entire team, there is one feature we will like to mention.Our new debugger! 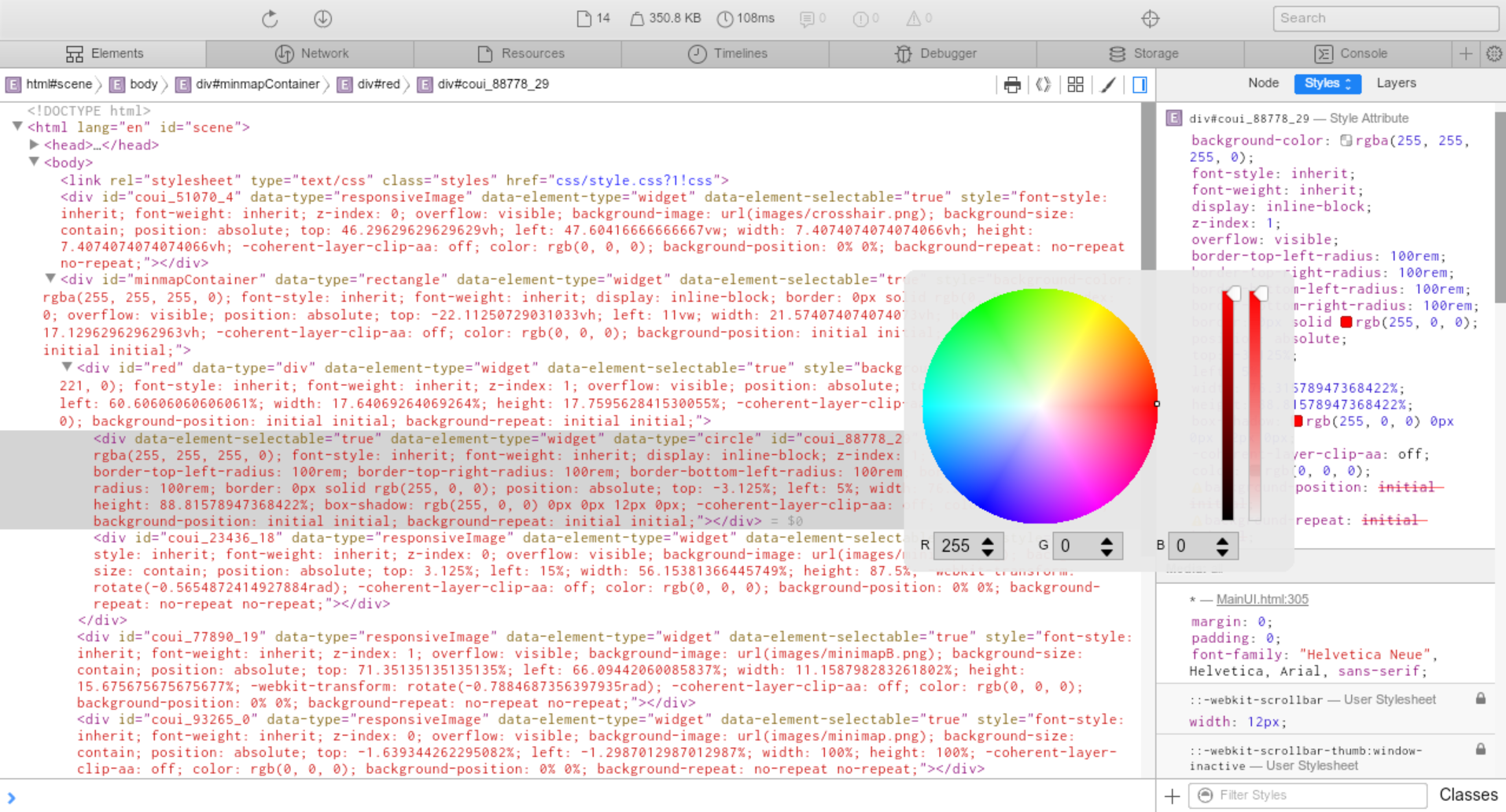 The debugger has several interesting additions and a completely new look. It might take some time to get used to it but just follow the tooltips and you should be good. The debugger actually has so many new features that we did not have enough time to integrate them all with this release. But have no fear, we will iterate on them in future versions to make everything available.

As we mentioned above, our goal was to assure that GT 2.0 performed in a very similar fashion to our current versions. We patched some of the live games that use GT and played them for hours to make sure that the performance, as well as looks of the UI, are on the same level. The new version of GT does not yield in stability to the previous one, meaning it leads to no additional crashes, memory leaks, and does not deviate from the expected behavior in any other way. After assuring ourselves that all was well with the new version were we comfortable with actually releasing the final product.

We are usually very fond of preserving backwards compatibility of our public API but a new major version is a good chance to change some things that were not optimal the first time around. For instance:

– Enabling JIT on platforms which support it (Win32/Win64/OSX/Linux), boosting the performance of your JavaScript by several orders of magnitude as the popular Octane benchmark shows: 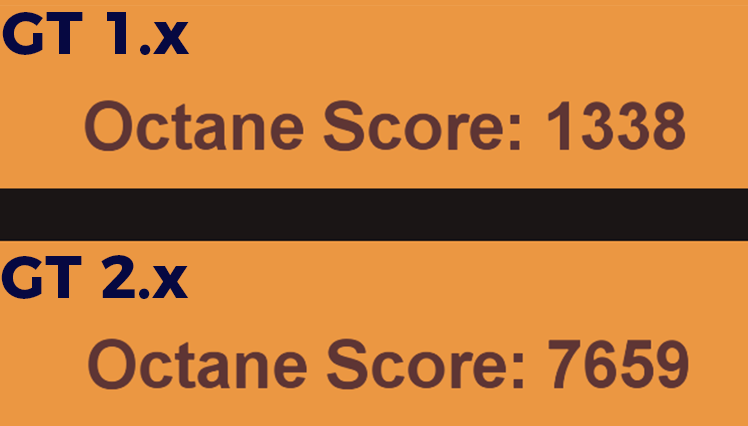 – Making sure our samples now follow the updated HTML specification. Parts of the spec changed between 2013 and 2017 and if your UI relies on the old behavior it will break in unsurprising ways.

For all of the above cases, we have prepared a transition guide available in our native docs. Follow the guide when upgrading for smooth sailing.

We advise everyone to update as soon as possible. New features & enhancements will only be available in GT 2.x versions. Naturally, if you have already released your game you might feel uncomfortable upgrading and that is absolutely understandable. We will continue to support the old versions – our support team will still be available and we will be occasionally releasing patches but those will only contain bug fixes. Additionally, our UE4 plugin will keep compatibility with GT 1 for some time – features added to it will also be accessible from 1.14.5.

GT 2.0 is a big step for us! We have been working restlessly to make sure this product update exceeds all expectations. Bringing the technology closer to the modern HTML standards is an exciting task, which we have been actively pursuing from the start back in 2012.

So, are you ready to test the power of Coherent GT 2.0?
You can do it by requesting a demo or contacting our Sales team at sales@coherent-labs.com for more information.

We hope that you are as excited about GT 2.0 as we are! If you have any questions write a comment below, tweet us or start a discussion in our Forum.

P.S. Now that we have moved past it, it is time to bring back our old release schedule (i.e. having monthly releases) and in fact, we are already wrapping up the major features of GT 2.1.