After the official release of Coherent GT, we are now rolling out our first major update (Coherent GT 1.1), packed with new exciting features. In this post we’ll give a quick overview of all the new features and how they improve the performance and developer experience provided by Coherent GT.

This release brings the first Beta of our pre-integrated UI Editor. The Coherent GT Editor is a powerful UI WYSIWYG editor based on HTML. Our main goal when designing the editor was to create an intuitive tool which enables developers to make their UI faster and easier than before. Now, you can jumpstart your project even if you are not a web guru! 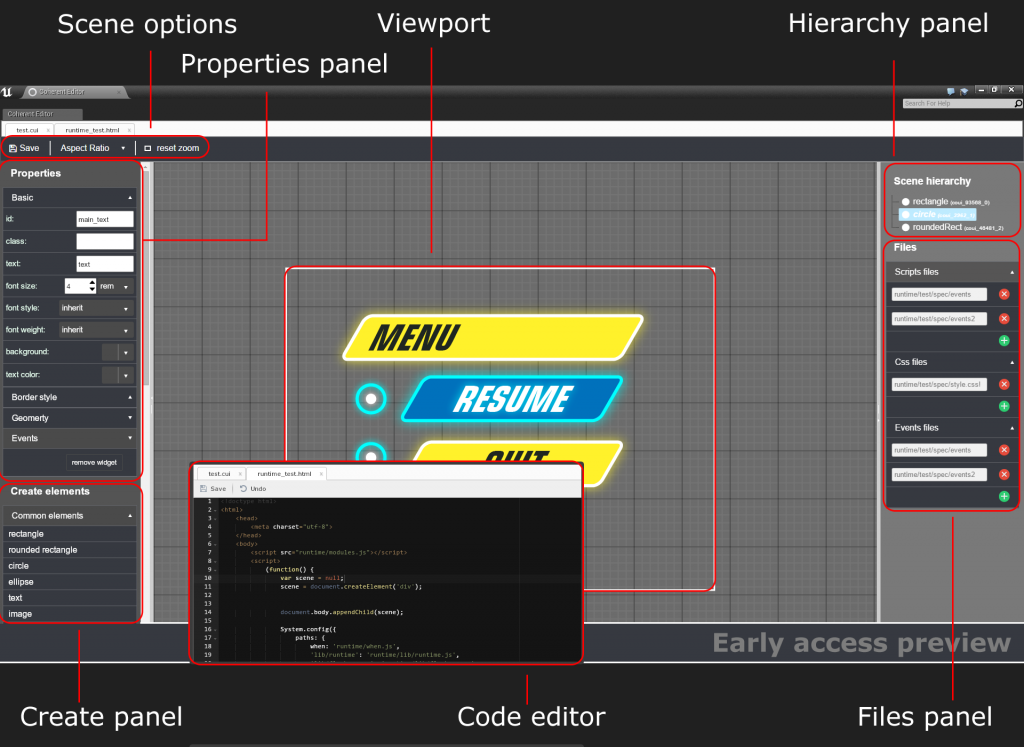 Coherent GT now works side-by-side with UMG. You can simply drag the Coherent GT widget in the UMG editor and directly start using it.

How developers will benefit from this functionality?

Developers will be able to gradually convert parts of their UI from UMG to HTML/CSS much easier than before. Also, they can use Coherent GT as an in-game browser – it is an order of magnitude faster than CEF-based solutions. Another benefit is that UMG can be used for simpler UI widgets and animations, while the more challenging and complex ones could be worked through Coherent GT.

The image shows that Coherent GT is live within the UMG editor. The developers can directly iterate over it and see the result of their work without having to start the game! All animations and logic runs even when the widget is edited.

We have completely re-written the memory management of Coherent GT. Our tests show an overall improvement of ~10% on all UIs. The new memory manager is much faster and reduces memory fragmentation significantly.

We have also introduce a new DirectX 11 backend that has significantly improved resource management. The new backend can bring up to 30% better rendering performance compared to the old one.

Additional to the new memory management ,Coherent GT 1.1 brings many other performance improvements. The overhead of calling JavaScript code from C++ has been reduced 3 times thanks to a new scheme for caching method handles and an elimination of allocations. Layers are now much cheaper to resize than before. Paints are also faster due to significant improvements in the algorithm that determines which parts of the UI have to be re-drawn.

Coherent GT 1.1 offers a new way of analyzing the UI. After you’ve launched an audit, the “Performance audit” feature will analyze all aspects of the UI – HTML, CSS, JavaScript code and will produce a report highlighting what might be sub-optimal in the content and will suggest a way to improve it.

Stay tuned for Coherent GT 1.2, which will include an amazing new feature. Do you want a tooltip of what to expect? Coherent GT will be able to move to a work-thread. This will allow the developers to remove all overhead of the UI from their main thread! Coming soon!